ROC curves and Area Under the Curve explained (video)

While competing in a Kaggle competition this summer, I came across a simple visualization (created by a fellow competitor) that helped me to gain a better intuitive understanding of ROC curves and Area Under the Curve (AUC). I created a video explaining this visualization to serve as a learning aid for my data science students, and decided to share it publicly to help others understand this complex topic.

An ROC curve is the most commonly used way to visualize the performance of a binary classifier, and AUC is (arguably) the best way to summarize its performance in a single number. As such, gaining a deep understanding of ROC curves and AUC is beneficial for data scientists, machine learning practitioners, and medical researchers (among others).

The 14-minute video is embedded below, followed by the complete transcript (including graphics). If you want to skip to a particular section in the video, simply click one of the time codes listed in the transcript (such as 0:52).

I welcome your feedback and questions in the comments section!

(0:00) This video should help you to gain an intuitive understanding of ROC curves and Area Under the Curve, also known as AUC.

An ROC curve is a commonly used way to visualize the performance of a binary classifier, meaning a classifier with two possible output classes.

For example, let's pretend you built a classifier to predict whether a research paper will be admitted to a journal, based on a variety of factors. The features might be the length of the paper, the number of authors, the number of papers those authors have previously submitted to the journal, et cetera. The response (or "output variable") would be whether or not the paper was admitted. 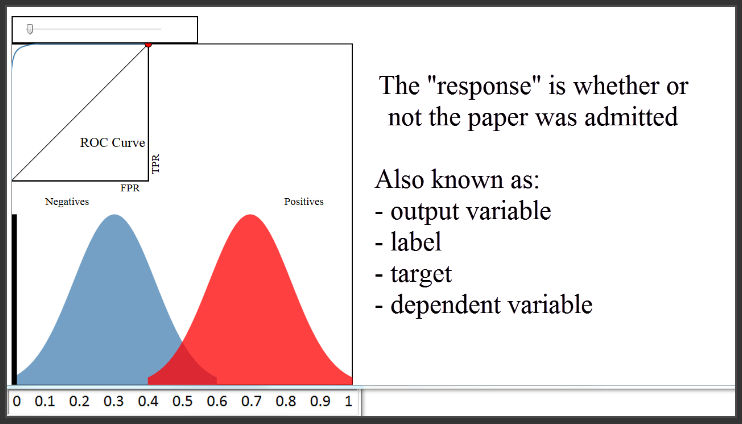 (0:52) Let's first take a look at the bottom portion of this diagram, and ignore the everything except the blue and red distributions. We'll pretend that every blue and red pixel represents a paper for which you want to predict the admission status. This is your validation (or "hold-out") set, so you know the true admission status of each paper. The 250 red pixels are the papers that were actually admitted, and the 250 blue pixels are the papers that were not admitted. 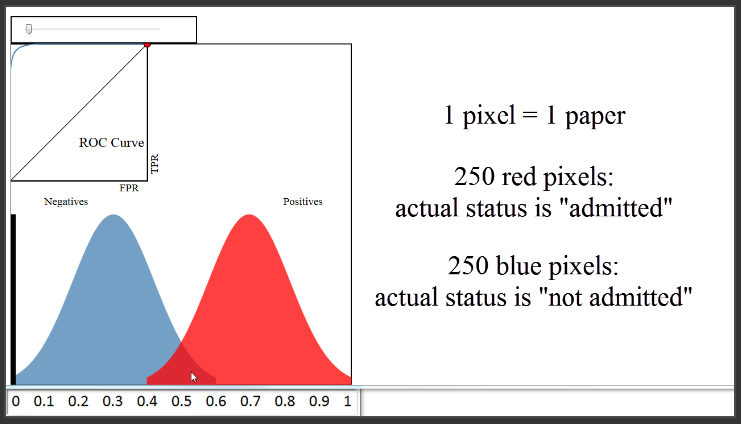 (1:32) Since this is your validation set, you want to judge how well your model is doing by comparing your model's predictions to the true admission statuses of those 500 papers. We'll assume that you used a classification method such as logistic regression that can not only make a prediction for each paper, but can also output a predicted probability of admission for each paper. These blue and red distributions are one way to visualize how those predicted probabilities compare to the true statuses. 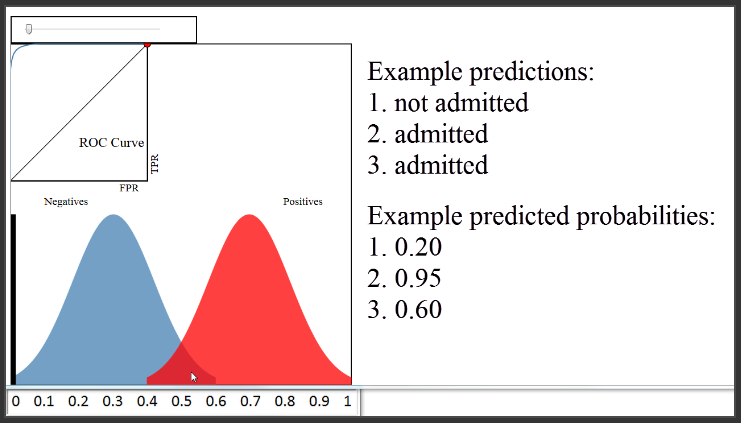 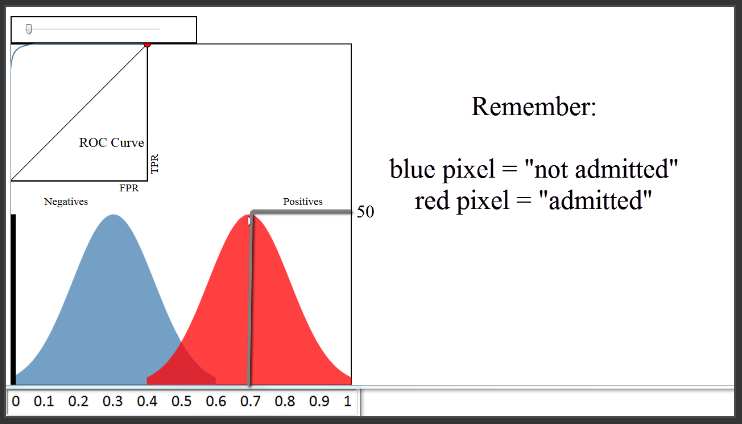 (3:16) Based on this plot, you might say that your classifier is doing quite well, since it did a good job of separating the classes. To actually make your class predictions, you might set your "threshold" at 0.5, and classify everything above 0.5 as admitted and everything below 0.5 as not admitted, which is what most classification methods will do by default. With that threshold, your accuracy rate would be above 90%, which is probably very good. 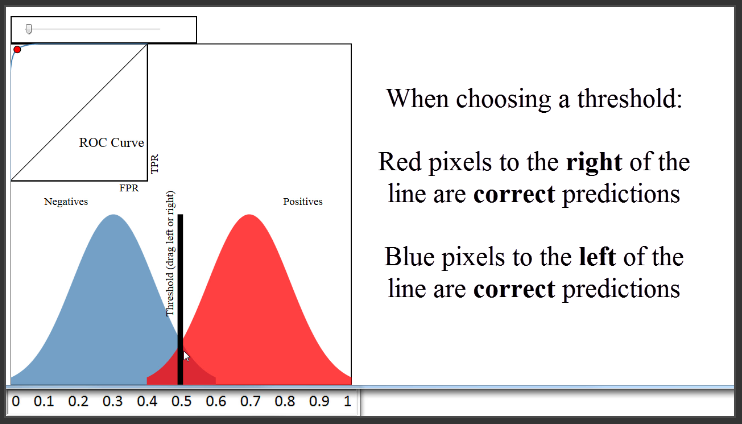 (3:58) Now let's pretend that your classifier didn't do nearly as well and move the blue distribution. You can see that there is a lot more overlap here, and regardless of where you set your threshold, your classification accuracy will be much lower than before. 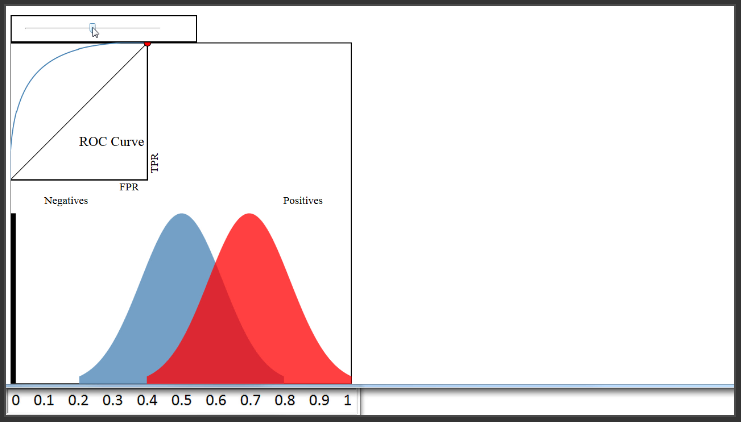 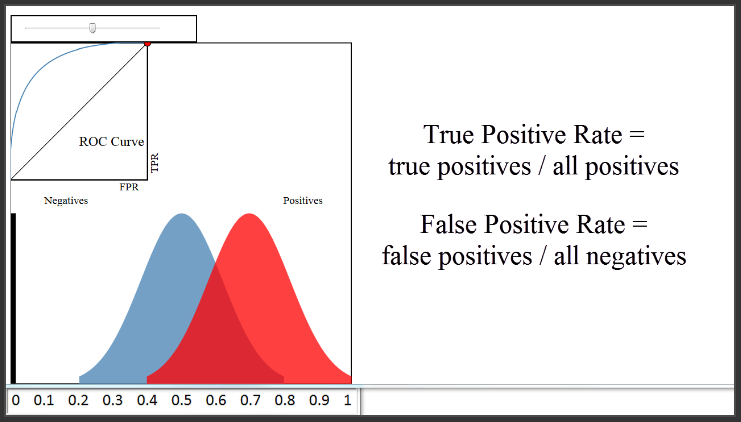 (5:15) To see how the ROC curve is actually generated, let's set some example thresholds for classifying a paper as admitted. 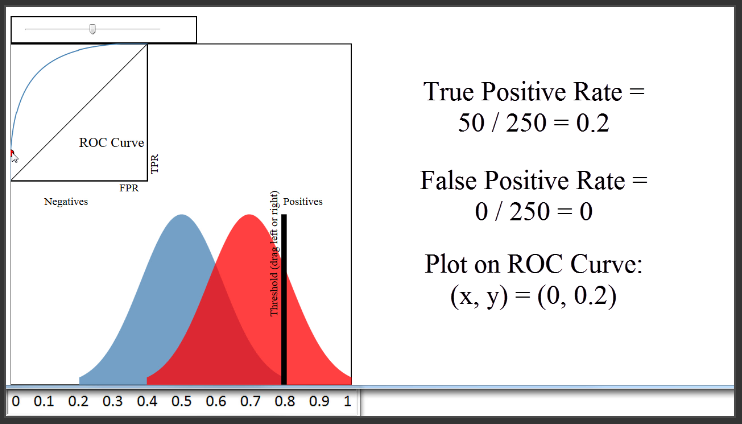 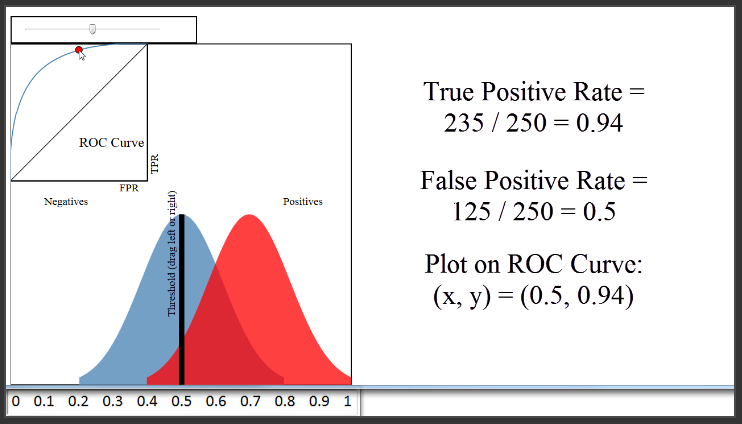 Now, let's move the blue distribution back to where it was before. Because the classifier is doing a very good job of separating the blues and the reds, I can set a threshold of 0.6, have a True Positive Rate of 0.8, and still have a False Positive Rate of 0. 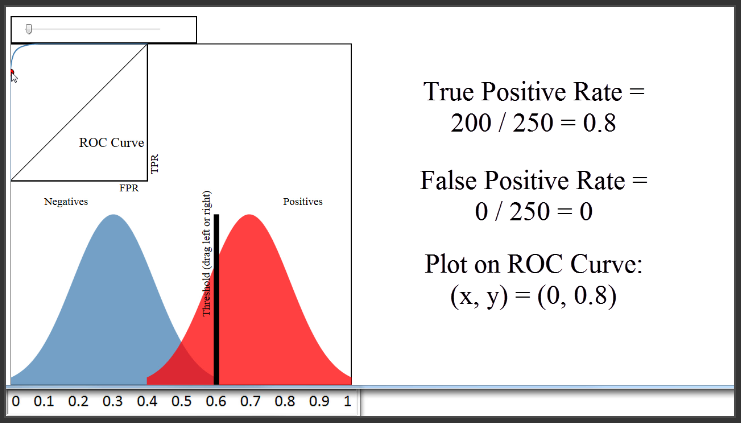 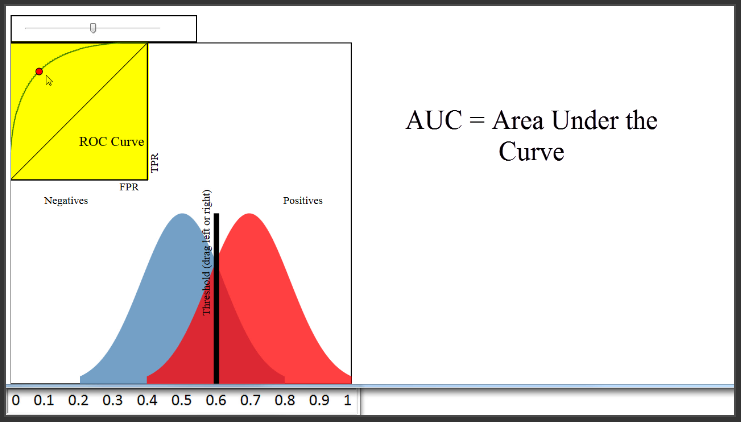 (9:45) There are two things I want to mention about this diagram. First, this diagram shows a case where your classes are perfectly balanced, which is why the size of the blue and the red distributions are identical. In most real-world problems, this is not the case. For example, if only 10% of papers were admitted, the blue distribution would be nine times larger than the red distribution. However, that doesn't change how the ROC curve is generated.

A second note about this diagram is that it shows a case where your predicted probabilities have a very smooth shape, similar to a normal distribution. That was just for demonstration purposes. The probabilities output by your classifier will not necessarily follow any particular shape. 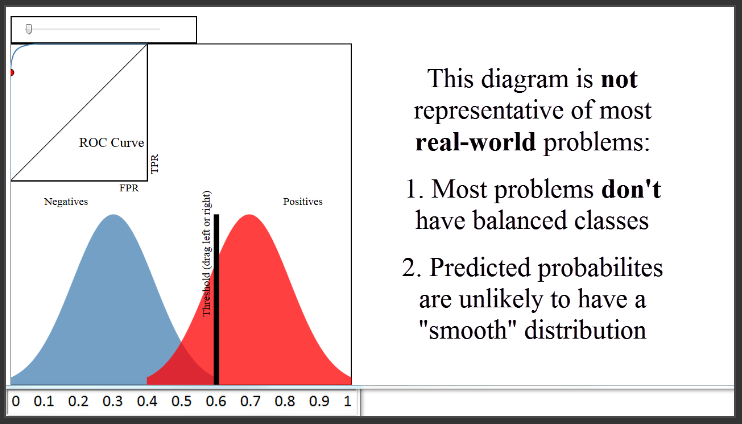 (10:40) To close, I want to add three other important notes. The first note is that the ROC curve and AUC are insensitive to whether your predicted probabilities are properly calibrated to actually represent probabilities of class membership. In other words, the ROC curve and the AUC would be identical even if your predicted probabilities ranged from 0.9 to 1 instead of 0 to 1, as long as the ordering of observations by predicted probability remained the same. All the AUC metric cares about is how well your classifier separated the two classes, and thus it is said to only be sensitive to rank ordering. You can think of AUC as representing the probability that a classifier will rank a randomly chosen positive observation higher than a randomly chosen negative observation, and thus it is a useful metric even for datasets with highly unbalanced classes. 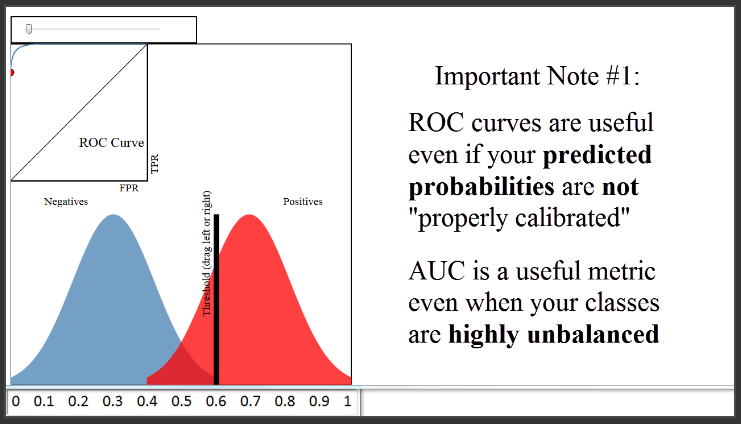 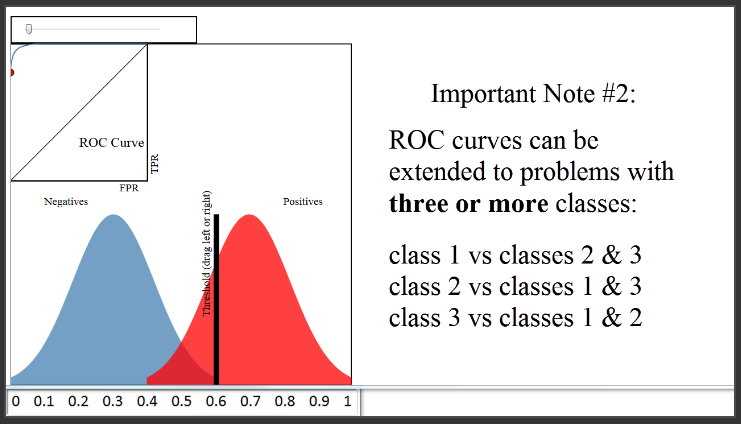 (12:30) Finally, you might be wondering how you should set your classification threshold, once you are ready to use it to predict out-of-sample data. That's actually more of a business decision, in that you have to decide whether you would rather minimize your False Positive Rate or maximize your True Positive Rate. In our journal example, it's not obvious what you should do. But let's say your classifier was being used to predict whether a given credit card transaction might be fraudulent and thus should be reviewed by the credit card holder. The business decision might be to set the threshold very low. That will result in a lot of false positives, but that might be considered acceptable because it would maximize the true positive rate and thus minimize the number of cases in which a real instance of fraud was not flagged for review. 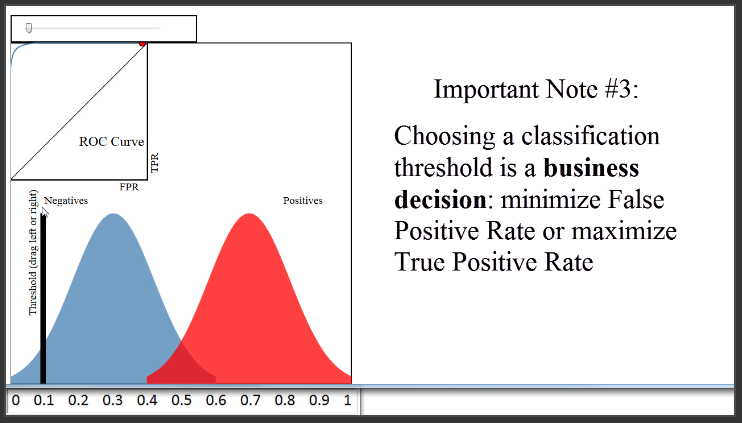 (13:34) In the end, you will always have to choose a classification threshold, but the ROC curve will help you to visually understand the impact of that choice.

Thanks very much to Navan for creating this excellent vizualization. Below this video, I've linked to it as well as a very readable paper that provides a much more in-depth treatment of ROC curves. I also welcome your questions in the comments.